CareTips makes it possible to create objects whose end-of-life is regulated and is not toxic for the environment.

Thanks to its 100% bio-based and natural composition, the Lactips material complies with the new European Union regulation on single-use plastics, Directive (EU) 2019/904. It is categorised as a single-use, non-plastic solution. Thus, it is not recognised as a plastic material under Commission Regulation (EU) No. 10/2011 of 14 January 2011. It complies with existing and upcoming regulations on microplastic. Considered a natural polymer under the EU REACH regulation, it does not fall under microplastic restrictions or labelling and declaration requirements.

The film’s compatibility has already been demonstrated in the food and cosmetics industries through numerous tests performed by the Lactips development centre and independent laboratories.

Lactips' 100% natural and biodegradable golf tees are an innovative and eco-responsible alternative to existing solutions (plastic, wood or bamboo) for golfers and the environment. Plastic free, the tees disappear completely and quickly in all environments and leave no visual pollution. They also prevent damage to maintenance equipment. 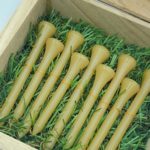